Happy Saint Nicolas day! About the day and the saint. Part 1

Hi everyone, I haven't written in while but it had been a busy time for me.
Anyway, the topic of the following post will have to do with religion, customs and above all - FOOD!

So let's get to religion first. Who is St. Nicolas and why do we celebrate the 6th of December each year? To tell you that I'll have to tell you a kindergarten story:

St. Nicolas was born in a wealthy family. His parents loved him very much and took good care of him but they died when he was a young man. St. Nicolas had no idea what to do with all the wealth left by his parents so he left it aside for a while. He didn't spend it, but he didn't give it all away either. One day, he heard a poor man complain to a friend - he had three daughters but could not afford to pay the dowry of even the eldest so that she could marry the man she loved. The poor man was worried of what would happen to his children if they don't get married - they will be avoided by the other members of the small society, insulted as burden to them, even deemed prostitutes - for why else would three beautiful young girls stay unmarried? St. Nicolas said nothing to the man - decided that first should check the story and learn more about him. So he followed him to see where he lived. It was a poor cottage and the man indeed had three beautiful daughters. While the girls were working, they were talking about the same things - how they won't be able to marry because on no dowry. St. Nicolas decided that if he gave the money in public the man would not accept them because of pride. So he devised another plan. The following night he slipped into the poor man's house and left three purses filled with gold coins by the side of each daughter's bed. The three girls rejoiced when they found the money the next morning. They got married soon after and lived in peace and joy with their husbands. Saint Nicolas found a good way to use the fortune left by his parents - whenever he saw someone in need, he just gave the money the person needed and left it by the side of the bed of that person at night.

So, to cut the long story short - Saint Nicolas was the prototype of Santa Claus - the two names even sound familiar. he had been a real historical figure: here is how the wikipedia article puts it:

Saint Nicholas (Greek: Ἅγιος Νικόλαος, Hagios Nikólaos, Latin: Sanctus Nicolaus); (15 March 270 – 6 December 343), also called Nikolaos of Myra, was a historic 4th-century Christian saint and Greek Bishop of Myra, in Asia Minor (modern-day Demre, Turkey). Because of the many miracles attributed to his intercession, he is also known as Nikolaos the Wonderworker (Νικόλαος ὁ Θαυματουργός, Nikolaos ho Thaumaturgos). He had a reputation for secret gift-giving, such as putting coins in the shoes of those who left them out for him, a practice celebrated on his feast day―St Nicholas Day (6 December, Gregorian calendar, in Western Christianity and 19 December, Julian calendar, in Eastern Christianity);and thus became the model for Santa Claus, whose modern name comes from the Dutch Sinterklaas, itself from a series of elisions and corruptions of the transliteration of "Saint Nikolaos". His reputation evolved among the faithful, as was common for early Christian saints. In 1087, part of the relics (about half of the bones) were furtively translated to Bari, in Apulia, Italy; for this reason, he is also known as Nikolaos of Bari. The remaining bones were taken to Venice in AD 1100.


The historical Saint Nicholas is commemorated and revered among Anglican,Catholic, Lutheran, and Orthodox Christians. In addition, some Baptist, Methodist, Presbyterian, and Reformed churches have been named in honor of Saint Nicholas. Saint Nicholas is the patron saint of sailors, merchants, archers, repentant thieves, children, brewers, pawnbrokers and students in various cities and countries around Europe.

So, on the 6th of December we celebrate the day of St. Nicolas. Originally, it was the day on which children receive gifts. St. Nicolas was the original Father Christmas - before the 1920s and Coca Cola's marketing idea.
In many countries children do receive gifts on that day, in Bulgaria there is a different tradition. Since he is the patron saint of sailors, on that day no one goes out at sea - it is said that from this day onwards - for a few weeks up to New Year's Eve - the sea is too dangerous to go into. The traditional dish is fish - nowadays of any kind but the traditional type is common carp - guess because the fish is very common in our region. Here is a picture of how it looks like - in case you don't know:


So, the fish should be a whole one - not cut in pieces and when you buy it it should be with it's scales and all the organs inside it. The idea is that the scales bring in money and the whole fish symbolizes prosperity. Then, when you clean the scales, you bury them together with all the bones of the fish somewhere in the garden. Tradition says that you should fill the fish with rice - again the money connotation - and walnuts. Since you are supposed to be fasting before Christmas, St. Nicolas' day is one of the few occasions when you can eat fish - i.e. meat. Nowadays it is a wonderful time to get together with the family.

I will post a picture of the carp we ate last year to get an impression of  what the whole thing looks like: 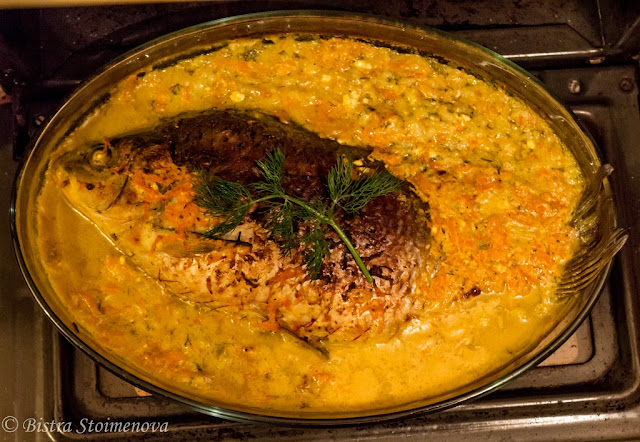 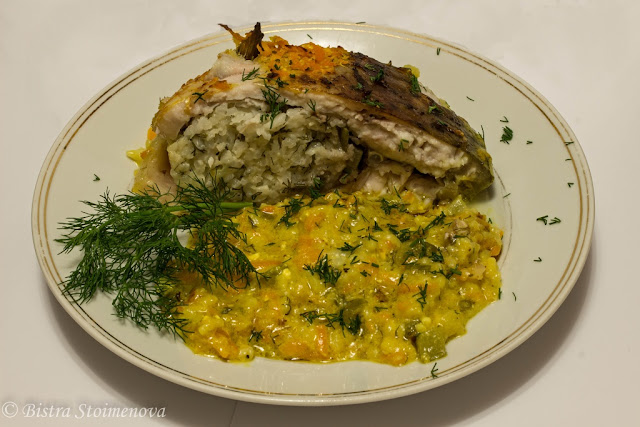 As for this year's carp - I'll write again with the recipe and some pictures when it's ready. Wait for part two of the post :)
Posted by Bistra Stoimenova at 15:45 ч.