In the previous post I talked about the tradition behind the celebrations on 6th of December. In this post, which is going to be way shorter, I'll show you the recipe for this year. As you remember the fish is always a carp so only the other ingredients vary. In case you don't remember or you haven't read the previous post - here is some info:

So, the fish should be a whole one - not cut in pieces and when you buy it it should be with it's scales and all the organs inside it. The idea is that the scales bring in money and the whole fish symbolizes prosperity. Then, when you clean the scales, you bury them together with all the bones of the fish somewhere in the garden. Tradition says that you should fill the fish with rice - again the money connotation - and walnuts. Since you are supposed to be fasting before Christmas, St. Nicolas' day is one of the few occasions when you can eat fish - i.e. meat. Nowadays it is a wonderful time to get together with the family.

Ok, you saw the idea from the previous year - radioactive St. Nicolas' day carp with rice and turmeric sauce - that recipe I'll give you another time.

The recipe this year is a bit different - we again have rice and walnuts and a carp but it looks different:

It is a common carp stuffed with rice, walnuts, raisins and leek and puree of creme cheese, spinach and leek. 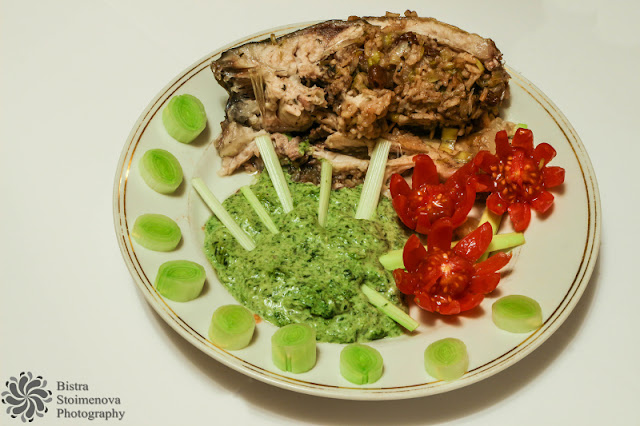 Here it is the recipe!

1 carp - around 2 kg.
3 pieces of leek
250 g. rice - white normal rice
100 g. raisins
100 g. walnuts
1 jar/packet/ whatever they sell them in your country/ of creme cheese or cheese and a lot of butter - around 250 g.
coriander - fresh - put as much as you like
black pepper
cinnamon
salt
water
cherry tomatoes - if you want to copy the flowers from the picture

1. OK, you'll need to cut the leek into rings and then fry it in some oil (choose the type - olive oil will be perfect but all other types will do). Then you add the raisins and the walnuts to the leek. 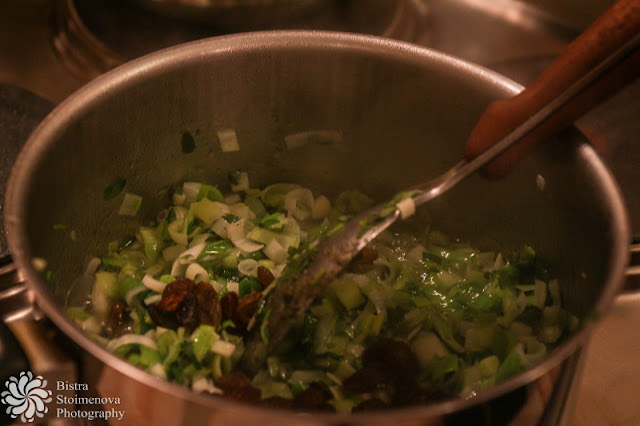 Somewhere around that point you add a bit of water.
You add the coriander and let the whole thing stew for a little - you'll need a deep pan or a casserole to get all ingredients in. 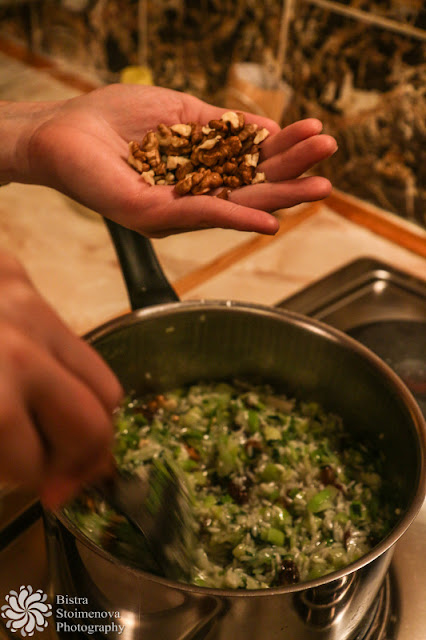 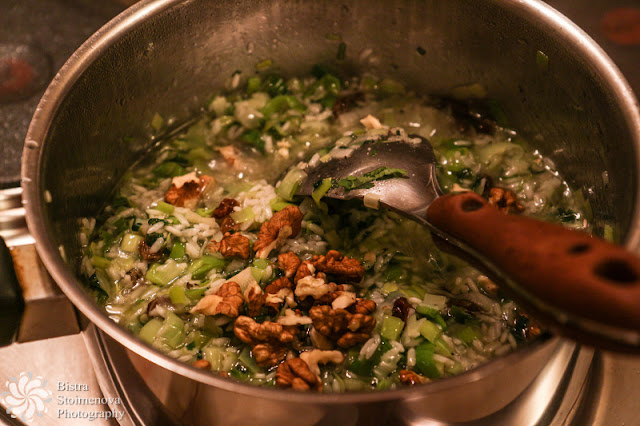 2.Then you add the rice and the spices - the black pepper and the cinnamon - again - put as much as you like in there. 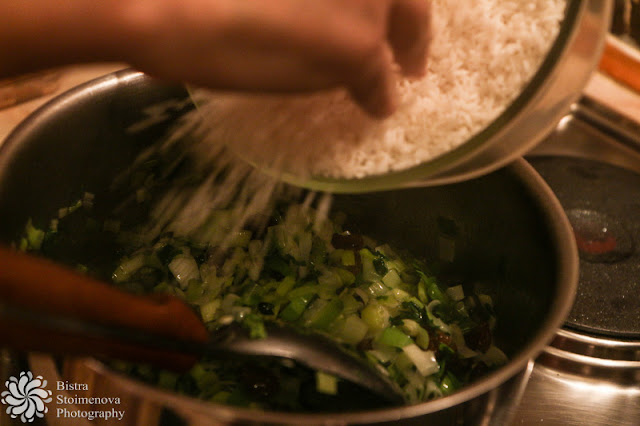 By the time you've added all things to the mixture it should look like this: 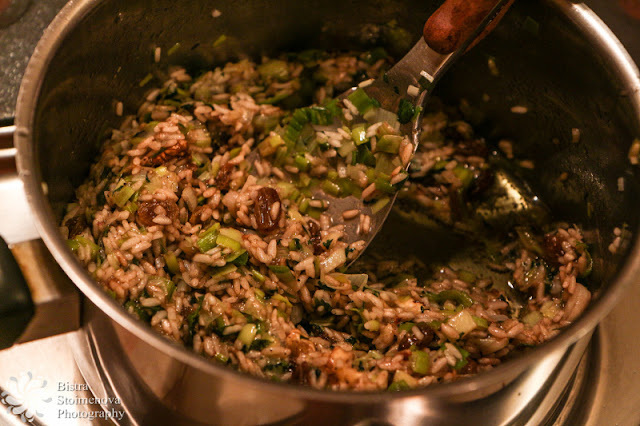 3. So, now you have to leave it to get the rice boiled a little - not over boil it because when you stuff the carp with it and bake it it will look like a very unpleasant lump with no particular ingredients. So you boil it for, say, half an hour and you proceed to the stuffing procedure.

Stuffing of the carp

Here you'll probably need an assistant - to hold the fish steady while you stuff it with the mixture created during the previous steps. Let's however, go over some things you do BEFORE that:

1. Clean the carp - that means all scales and intestines (to do that cut the carp open and cut out the intestines you find in its belly). DO NOT throw away the scales - they have to be buried in the yard with the bones to bring good luck :)
2. Rinse the carp with cold water to get rid of the blood and clean the belly.
3. Stuff the carp - have someone hold it open for you and you put the stuffing in. Don't worry if the stuffing is much more than the carp's belly can hold - you just put it around it in the pan/pot you'll be using to bake it in. So, after you stuff it you have to sew up the opening so that the stuffing doesn't get out during the baking process. You'll need a big needle and a strong thread to do that.

I don't have pictures of that because I was the assistant - you see, you can't hold a camera if both your hands are around the belly of a fish.

1. After you stuff and sew up the carp you place it in whatever you'll use to bake it it - it should be big enough for the carp to lie on one side.
2. You put all the remaining stuffing around the carp and add a bit of water - 1/2 liter or more - depends on how much stuffing you have left.
3. Put it in the oven for around 40 minutes - when it's ready it should look like this: 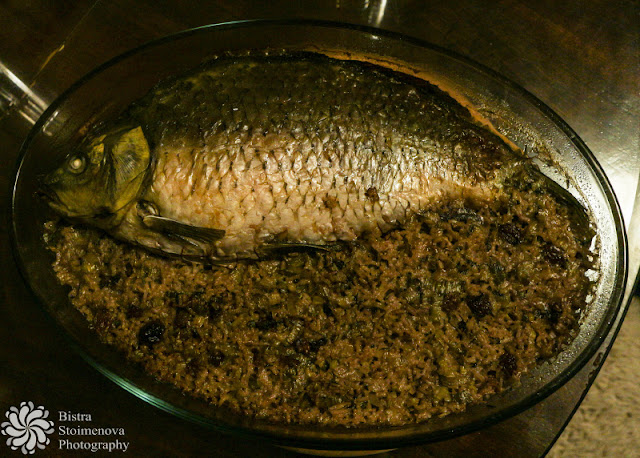 This one is the tricky part.
So for that you'll need

1 piece of leek
500 g. of spinach
250 g. of creme cheese (in case this doesn't exist in your country - get the softest white cheese - Feta will do - and a lot of butter and put the two into a blender)

1. Clean the spinach and cut it as if for salad. Cut the leek into rings and fry them until they show some sign of getting cooked.
2. Put the cheese and get the blender ready - it would take a lot of time to get the creamy texture you are looking for.

3. If you are fan of fancy-looking food in you dish try this;

Get some shapes you use for cutting cookies and fill them with the puree - don't forget to put some foil underneath so that nothing leaks out. 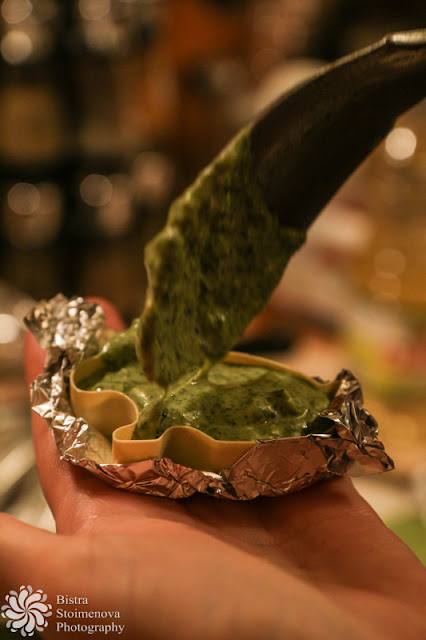 Put the forms into the freezer for half an hour - AT MOST - I left them there for a day and they froze. 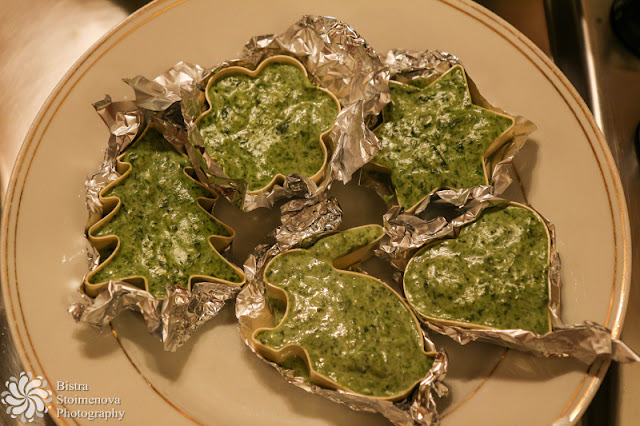 Use them as decoration.

Since I had mine frozen I used flowers made from cherry tomatoes to make up for that. They are easy to make - you just start cutting the petals from the top without cutting them out fully. When you're done with the whole tomato and spread the petals - you have a wonderful flower.

Enjoy! If you do the recipe, I'll be glad to see a picture and to read your comments on it :)