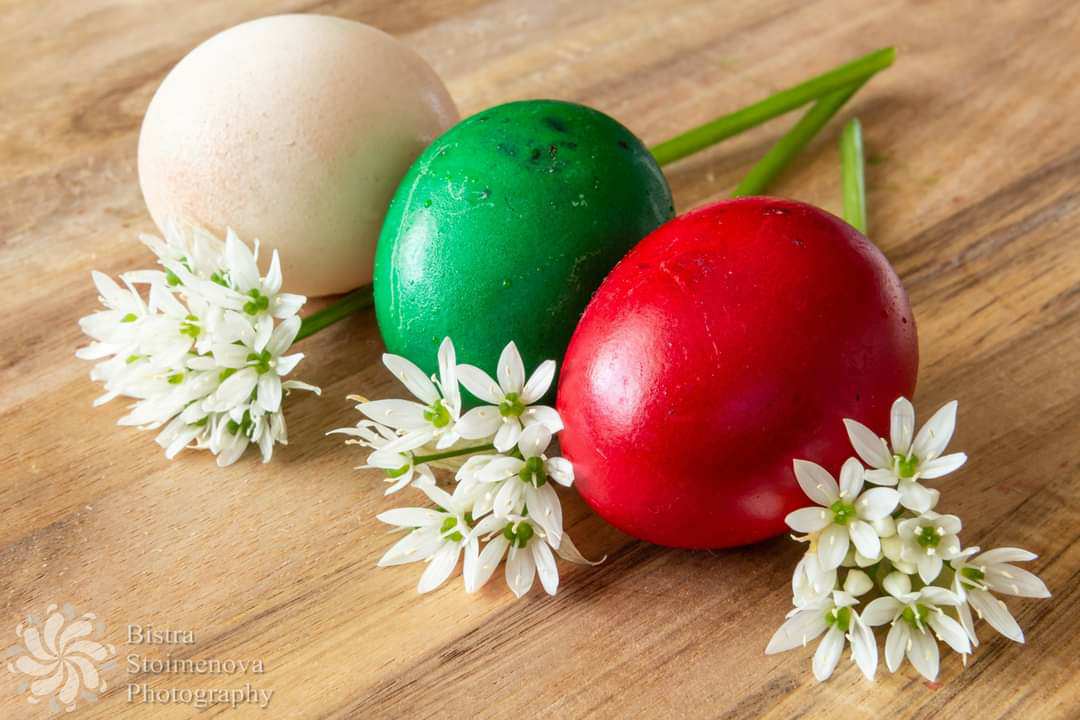 Today is a huge religious holiday in Bulgaria 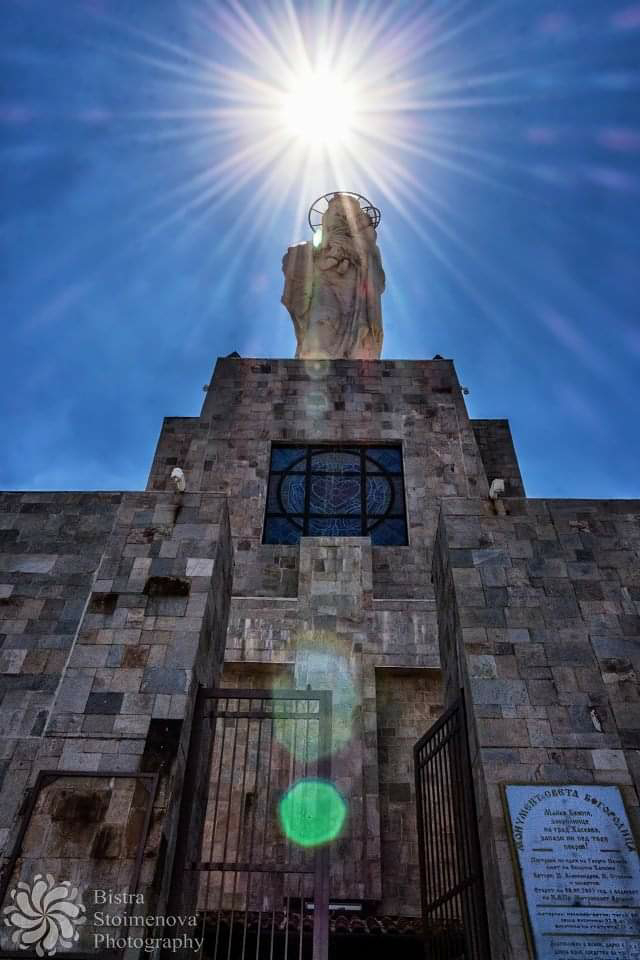 Today is the day of Dormition of the Mother of God

In honor of the holiday, I'm posting a picture of the highest statue of the Holy Mother of God in the world. It's 14 feet tall and the chapel below it-17. It's located in Haskovo, Bulgaria.

Truth be told, this is an old photo but I still love it :)

Getting there is easy. There are signs all over the town because it's one of the main landmarks. If you climb up the bell tower you can enjoy a panoramic view of the town. The chapel is open every day, but in order to enter, you have to be properly dressed.

The story behind the shot:

This shot is an accident. I had some bad luck that day, I ended up on location right at noon when the sun shines directly from above. With that sun, the statue remained in shadow, so I didn't expect miracles. Before I left, I decided to take a shot of the sun and the statue to make a silhouette.

However, this was far beyond my expectations...

To create an image like this, you'll need a closed aperture (the biffer f/ number, the better) and bright sun. The rest is a matter of luck.

Two on the road 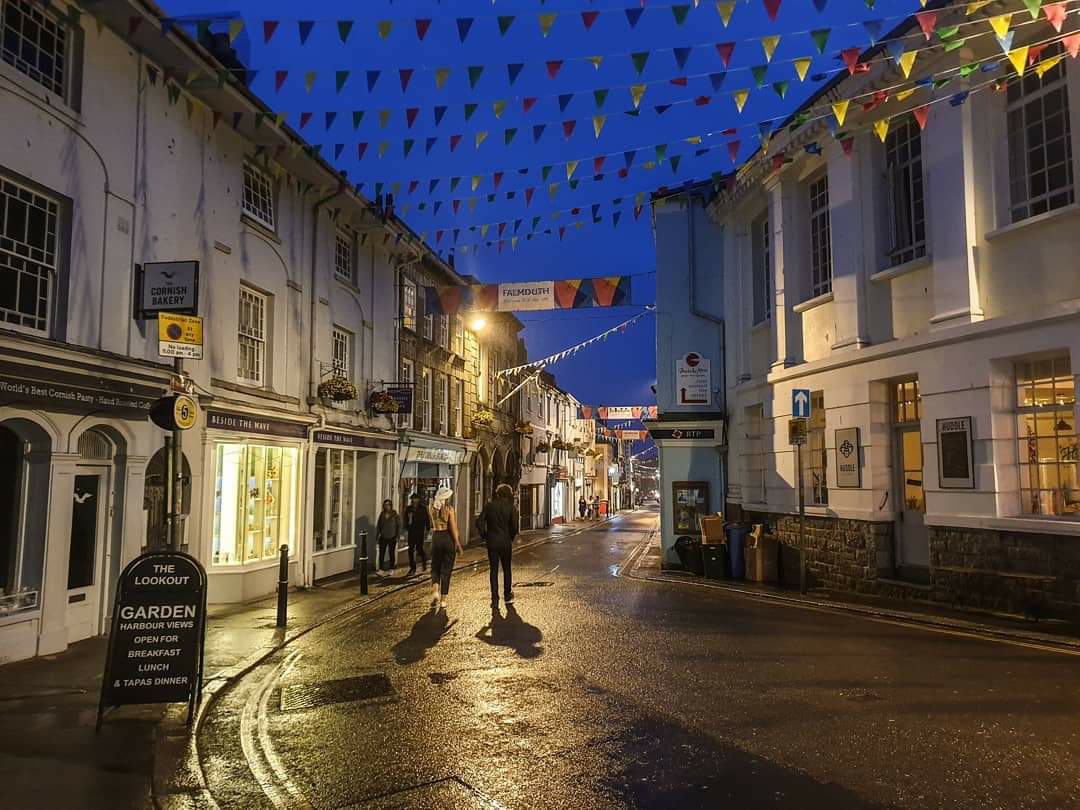 Two on the road
A calm and typically rainy evening at Falmouth, UK
I know I haven't been around these months but I'm trying to get to grips with everything. So, an Instagram picture is the perfect way to bring the page back to life.
The story behind the shot
In case you don't know, shops and restaurants there close at 9 p.m. local time. So, if you are used to the Eastern European way of life (where the night just starts at 9) you will surely be a bit shocked. As I was back then.
The UK weather stereotype goes that it rains everyday. Not here though.This place has the climate of a greenhouse. It's awfully humid and full of greenery that I wouldn't have believed could grow in there (I'd rather think it would be in Greece). When it rains though, it's not torrential rain. No big raindrops to tap on your windows. Nothing of the sort. It resembles a thick, persistent mist that gets you soaked in no time.
While hiding from such a rain, I got bored and started to take pictures of what I saw. This one is one of my favorites :)
#bistrastoimenova #phonesnap #photographylovers #photography #uk #uklife #falmouth #falmouthcornwall #ukevening #bluehour #cityscape #citylife #citylights #streetphotography #phonephotos #phonephotography #cornwall
Posted by Bistra Stoimenova at 16:07 ч. Няма коментари: 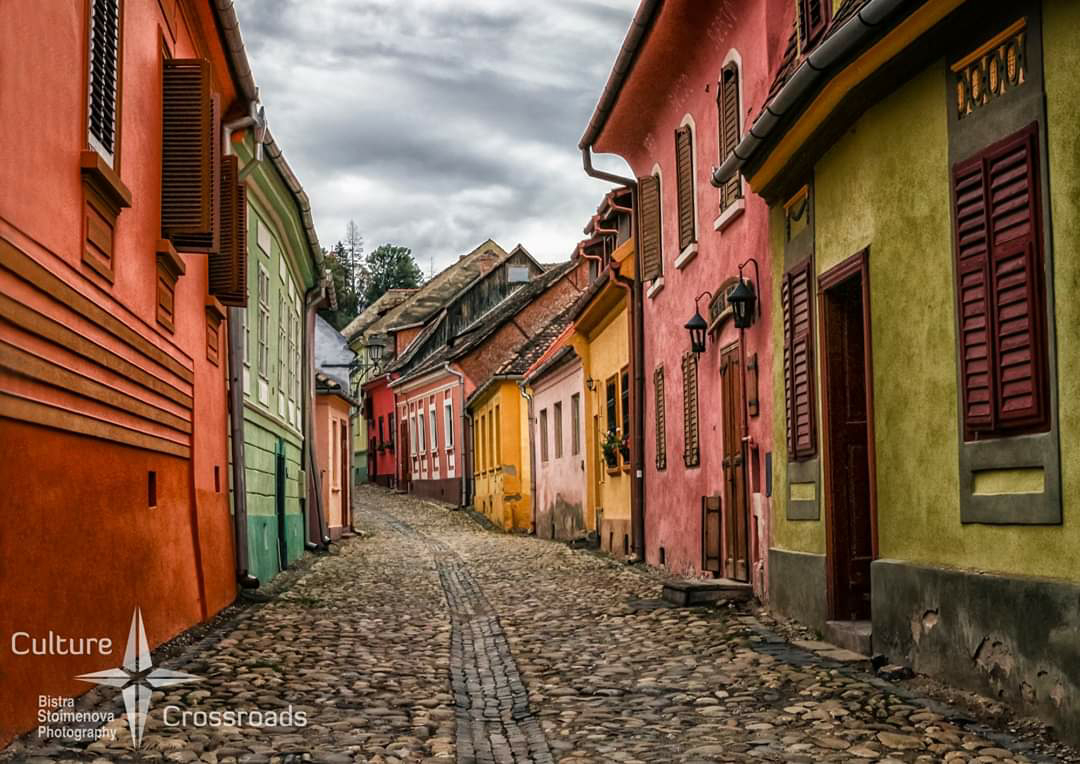 Sighisoara old town, Romania
A walk through the alleys of Sighisoara in a gloomy and rainy afternoon. You must have seen this shot here and there, if not - now's the perfect time to stop and read.
I mentioned a long time ago that Romanians are not afraid of rain at all. Photographers, on the other hand, hate humidity in all it's forms. However, when everyone around stares at you because you carry open an umbrella and you wander around the desolate and gloomy alleys of an unknown town, attracting unwanted attention is not the best idea.
The story behind the shot:
This is the old town of Sighisoara, and by the time I got to that part, it was already raining unpleasantly. The alley was narrow and beautiful, but one has only two hands... What happens in that case? Lean against a door and shoot, run to the next one and so on. It doesn't seem to be raining in the picture, but in truth it was well, not OK.
Photo advice and safety:
There is no camera that loves water. So don't get too wet. Wipes will not go unused, as well as a raincoat (though I hate them).
Watch out for the empty streets too. Sighisoara is a medieval city and this makes a walk through the quiet areas a bit creepy. You don't know who's watching you.
Read more about the place on the Culture Crossroads project page.
Posted by Bistra Stoimenova at 17:23 ч. Няма коментари: 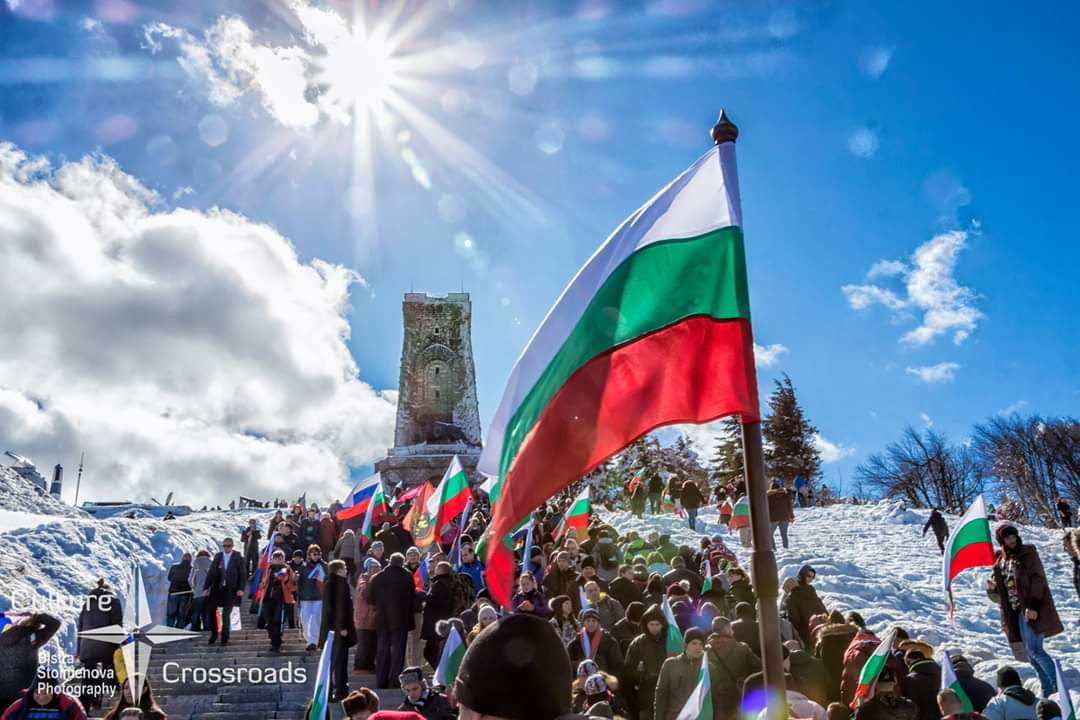 Happy Third of March to all Bulgarians and people who feel for Bulgaria in some way :)
Today, we celebrate 'Liberation day'
Here is some info about the history of the place.
The Crossroads point:
The monument on Shipka peak as seen from Orlovo Gnezdo (the literal translation for that in English would be Eagle Nest)
The place is a very dramatic an symbolic for all Bulgarians because 141 years ago it was the place where the fate of the whole nation was decided. It is a place where we honour the heroism of those who fought there to make us safe.
In 1877, during the Russian-Turkish Liberation war, that place was attacked by the Ottoman army.
The idea was that one Turkish pasha (Siuleyman) had to go to Northern Bulgaria to help another pasha (Osman) with the Russian siege of Pleven (which is in Northern Bulgaria). Had he done that, the Liberation War would have ended with defeat for the Russians and devastation for the Bulgarians.
This is where Shipka comes to the fore – to go to Northern Bulgaria, Suileyman had to cross Stara Planina (which stretches across the middle of Bulgaria) but driven by anger he foolishly chose the highest mountain pass in the area – Shipka pass.
The defenders on the homonymous peak above the pass were around 7 500 Bulgarian volunteers and Russian soldiers against more than 27 000 Turkish soldiers and bashibozuk (the Turkish version of volunteer army, known for their cruelty). In a dramatic 3-day fight when even the ammo ran out, the defenders fought till the last one standing and even threw the dead bodies of their comrades against the enemy. They managed to stand their ground until some reinforcements were sent and that slowed down the Turkish army and basically tilted the scales in favour of Russia. Today, it is said that that fight won the whole war and won freedom for Bulgaria
The monument has long and tangled history (which deserves a post of its own) so for the time being I'll only mention that it was built on donations and opened to visitors in 1934. It is open all year round, the exact working hours vary according to season.
More info on how to get there, tickets etc. can be found on their website:
http://www.shipkamuseum.org/en/
Posted by Bistra Stoimenova at 16:49 ч. Няма коментари: 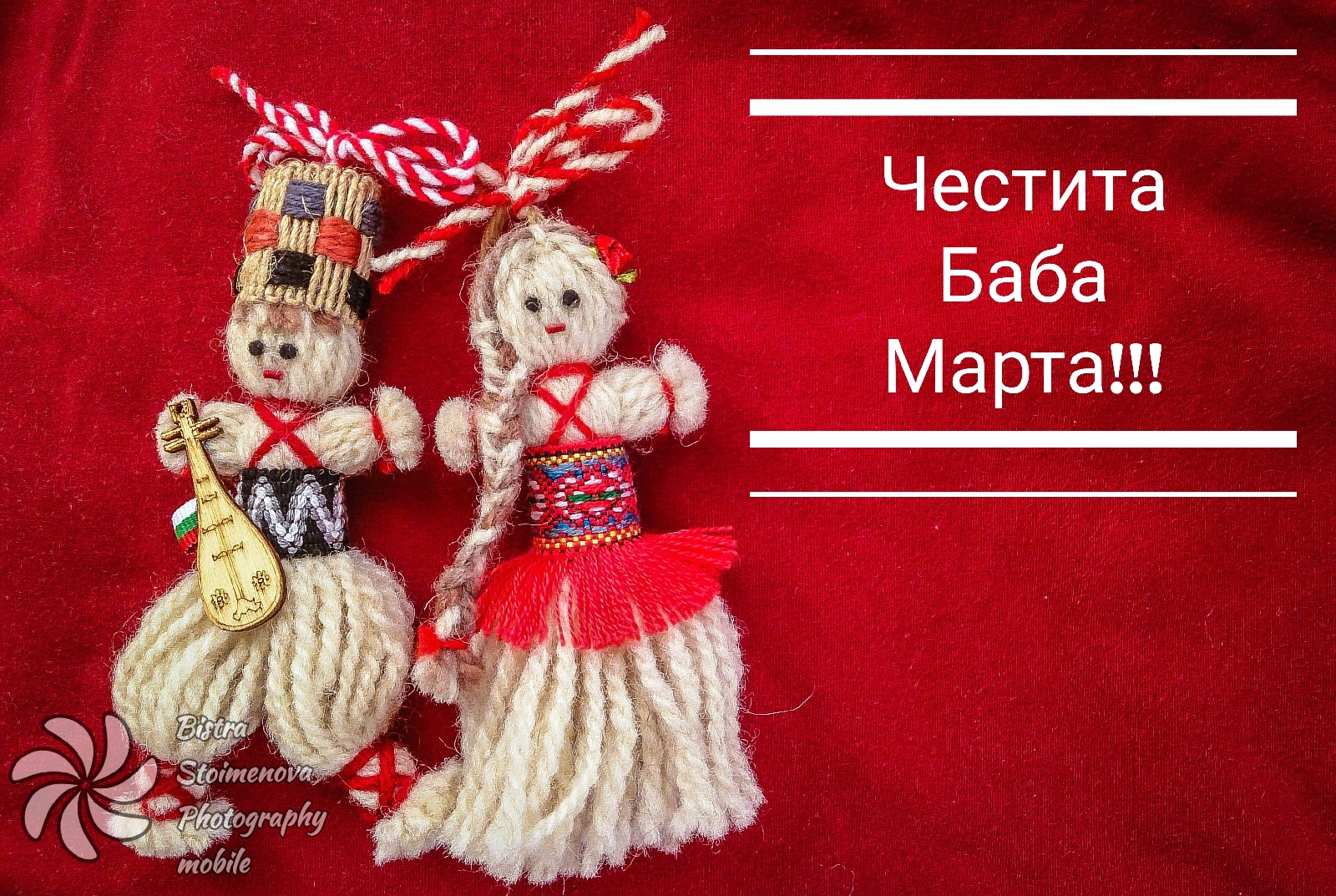 Happy 1 of March everyone!
Or as Bulgarians say Chestita Baba Marta! Wishing you to be red and white like a Martenitsa!
The Crossroads point:
Today Bulgarians celebrate the end of winter and the arrival of spring. Unlike Western cultures where Spring is a young and beautiful woman, our Spring is the so called Baba Marta - an old and fiery-tempered granny. She is best-known for her ill temper. When March starts, all want to keep to Baba Marta's good side :)
The legends:
According to folklore, Baba Marta is the only sister of the 11 month gods and is particularly angry with her two brothers - January and February - because during the winter they drank all her wine  :-D
So, even though March is technically a spring month, the weather is heavily dependent on Baba Marta's mood swings. One day she's happy and the sun shines, the next day she's furious and blizzard comes around.
On this day, Bulgarians greet each other with the wish: Happy Baba Marta! Let you be red and white like a Martenitsa!.
Another legend ties Martenitsa to the dawn of Bulgarian history. Back in 680 AD, when Khan Asparuh (the first Bulgarian ruler and founder of the Bulgarian state in traditional historiography) was fighting Byzantium, his sister was taken captive by the Byzantine emperor. She sent a pigeon with a message to her brother about the Byzantine army coming to the Bulgarian stronghold on the bank of the Danube river and tied the slip of paper to the animal's leg with a white thread. The pigeon flew but was shot crossing the Byzantine lines. Still, it made it to Asparuh's camp. He read the message and saw that the thread had turned half white and half red. He took that as a good omen, tied the thread around his wrist and rode into battle... To win and to establish the Bulgarian state - 1300 years later, the country has not yet changed name (not even once) and still stands in its original place on the map.
What is a Martenitsa?
The symbol of the holiday is called a Martenitsa (from the name for the month March in Bulgarian). It is either a bracelet made of white and red thread or two anthropomorphic figurines - called Pizho (the male one) and Penda (the female one) . You can see them below. Usually Pizho is a red figurine and Penda - a white one. The Martenitsa is worn as an amulet  all March and is taken off only after one sees a stork (the messenger of spring in Bulgarian folklore) or till the month is over. Usually, the martenitsa is then tied to a fruit-bearing tree, so that it would bear more fruit the upcoming year.
Fun fact is that Martenitsa is worn all over the Balkan peninusula - in Romania, Greece, Macedonia, parts of Serbia. Bulgarian nationalists explain that with the territory occupied by the First Bulgarian kingdom (which covered the territories of the present-day countries above). Truth is that it's a wonderful tradition to keep.
Fun fact 2 - a joint application of Bulgaria and Romania put Martenitsa on the UNESCO World Heritage list (of intangible heritage) in 2017 :)
So, happy spring and be healthy!
Posted by Bistra Stoimenova at 15:42 ч. Няма коментари: