Today I'm gonna take you to Rila Monastery - the biggest monastery on the Balkan peninsula. It is situated in the Rila mountains next to the Rila town. If you are traveling from Sofia - you'll have to drive for about two hours - there is a new motorway. In case you don't know where to turn - at the point together with the brown road signs (which indicate a place of cultural significance and hence - a tourist attraction) there is a big stone statue of St. Ivan Rilski - the patron saint of the monastery, a miracle worker and patron saint of Bulgaria as well. I can't show you a picture because it never crossed my mind that I should. Next time, maybe. Since it is a favourite place of mine, you will see several posts about it - I will try to tell you different things about it each time.

The first thing you need to know is that is an ORTHODOX CHRISTIAN (EASTERN ORTHODOX I mean - think of Greece and Russia and you'll get the point) monastery so there are a few things you should know BEFORE you go there.

What to wear?
When you are traveling, you want to be comfortable, right? Well, when you go to a monastery or church in Bulgaria there are a few restrictions:

- Shorts, strapless tops or dresses (or such with straps altogether), short dresses are STRICTLY FORBIDDEN. It is considered an offense to God and the church to go in like that so they will either give you a scarf to tie around yourself or tell you that you cannot enter. You need to be wearing a top with sleeves (short at least but sleeves). Low cut clothes are also forbidden for the same reason. THE WHOLE THING ABOVE GOES FOR BOTH SEXES AND ALL WEATHER CONDITIONS!!! It doesn't matter if it is 40 degrees Celsius outside - you should show respect no matter what.
- Unlike Greece, where they will make you wear a skirt, even if you are in long jeans, or Russia - where they make you cover your hair - here no such things are needed. You just need a skirt at knee length at least or long pantaloons and a top with at least the hint of sleeves and no low cut neck line.

Pictures:
Snapping is a disease sometimes so you should be careful where do you take your camera out!
- Taking pictures INSIDE MOST CHURCHES AND MONASTERIES IS FORBIDDEN UNLESS YOU ASK FIRST. Sometimes they will say it's OK as long as you do not disturb the other people (which means - NO FLASH) but in most times it is strictly forbidden unless it is a very big holiday (when everyone has a camera) or a wedding/ christening etc.  In Rila Monastery you cannot take pictures inside.

In Church:
Orthodox Christian churches have very little to do with Catholic ar Protestant ones.

- You will see chairs in the church along the walls but they are NOT for sitting. They are intended for those who cannot stand on their own or are too sick to do so. Unlike Catholic churches - here you pray on your feet, not on your knees. So, don't sit unless you feel faint.

- BEWARE OF CANDLES - everyone who goes inside the church to pray lights a candle or many. The custom is that uneven numbers (1, 3, 5 etc) are for the LIVING and even ones (2, 4, 6, etc.) are for the DEAD. Keep that in mind if you want to do what everyone else is doing. For the living you place you candles on your eye level - there are many candelabras, don't worry - and for the dead - above ground in SAND (In Greece it's all in sand - guess it's because it's easy to clean and they have a lot of it).
What I was trying to say is that candles are most often made of wax which is very hot as it melts and can ruin your clothes and gear if you are not careful. Also - if it is a big holiday - there are a lot of people with candles around you so BEWARE OF CATCHING FIRE - hair and clothes from artificial materials are prone to that.
- Be respectful - don't get in the way of monks/ preachers etc. They have their won work to do and tourists are none of their concern - there are tour guides for that. DON'T LAUGH AND TALK IN A LOUD VOICE INSIDE! You interrupt others and make noise and it is generally bad behavior.
- Icons and frescoes CANNOT (in most cases) be touched! You can ruin them by accident.

- Be careful with oxygen - when candles burn, they use up the oxygen in the room so if you feel dizzy - go outside IMMEDIATELY. carbon mono-oxide is not to be trifled with.

So, after we got trough the preliminary - what about the monastery itself? Or the saint?

You'll learn about that in my next post :)
Posted by Bistra Stoimenova at 14:27 ч. Няма коментари:

You can now find me in www.snap.bg

Hi, everyone, now you can find me in the Bulgarian photographic register www.snap.bg.
Another opportunity and way to contact me!
www.snap.bg/fotograf.php?n=911 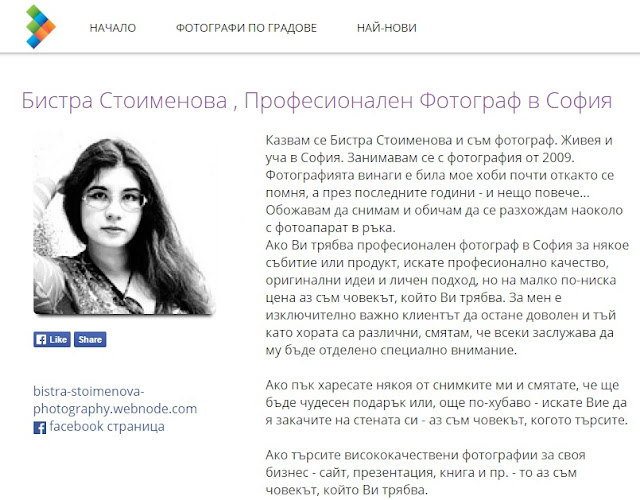 Kiopoolu - or why many countries quarrel for the same dish

The Balkans are famous for many things - these days most of them are not nice at all - the financial crisis in Greece; the influx of refugees, corruption, low standards of living, high crime rate and so on and so forth. But, on the other hand, the Balkans have amazing landscapes, great food and hospitality (according to foreigners) to offer those who dare venture into that.

Point is, that very few people do so. And even if they do - the food is normally out of the question to taste. To us, the natives, there is nothing better for breakfast than a loaf of bread with sudzhuk (dried sausage that tastes way better than a salami), luitenitsa which is better than any ketchup you can come up with (or ajvar, or pinjur - or whatever the name in the country).

It seems that, however, foreigners look at those the way an European would look at a table in the Sahara or with an exotic tribe somewhere in Oceania and there offered to eat roasted scorpions or dried slugs for breakfast.
Some of the dishes do look weird or dangerous for your health, but trust me, any of those is 1000 times healthier than a hamburger.
And here we come to the question - why is that so?
First we have to start with a little bit of history and geography.
The Balkans = The Balkan Peninsula (in case someone doesn't know) are situated in the southeast of Europe - if you have the map - start from Spain and count the peninsulas - the Balkan is the third one from left to right. The name comes from the longest mountain range (Stara Planina in Bulgaria also known - for some reason - as Balkan)The climate is relatively warm and in most parts allows for four seasons to appear. That means that there is an abundance of spices, products and times of the year that give birth to some very strange results.
The second factor, as I mentioned, is history. The Balkans are at the crossroads of Europe, Asia and the Middle East. Because of that many nations wanted to rule there or just traveled through and people came in contact with many different cultures, races and of, course - cuisines.
So when the Ottoman Turks invaded and conquered the peninsula at the end of the 14th and the beginning of the 15th century, there was a lot there already. The conquerors, as all others before them, brought their cuisine with them.
For most nations on the Balkans the existence within the boundaries of the Ottoman Empire lasted between 400 and 500 years. For that time, of course, the conquered had enough opportunities to get to know the new trends and they started adopting some Turkish words.

So here we come to the problem - who invented kiopoolu? If you ask any of the Balkan nations, they will all proudly declare it was them. Judging by the name, however I am more inclined to think that it was the Turks that brought it to the Balkans. And it is not only that dish - nearly half of the cuisine on the Balkans is like that. I will keep that track in later posts.

So, how do we prepare kiopoolu?

In case you want to taste that dish you'll need:

So the first thing you have to do is to mash the peppers and the eggplants together - I prefer to have more peppers than eggplant but it is up to your preference. There are no strict rules - each one does it differently. DO NOT USE THE BLENDER - you'll get a ketchup - like substance that has NOTHING  to do with the original. The point is to get a paste in which you can see the ingredients.
Then you add in the garlic, parsley and the spices and can eat that on a loaf of bread.

If you wonder where to find that in the camera menu - look below: 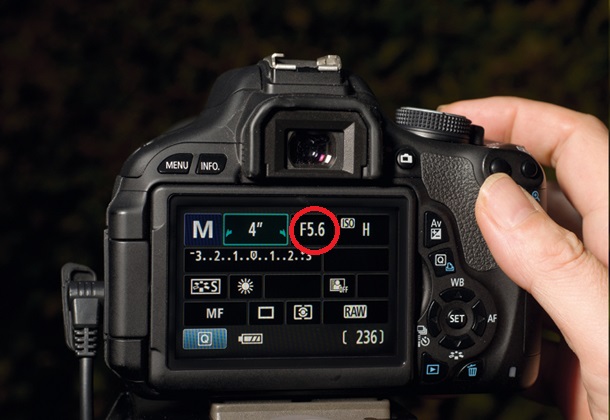 There is only one thing you should know about aperture - THE BIGGER THE APERTURE THE MORE THE LIGHT AND VICE VERSA. That means that at f/2.8 you'll not need abundance of light whereas at f/16 you'll do.

Back to Shoot Like a Pro
Posted by Bistra Stoimenova at 14:23 ч. Няма коментари: 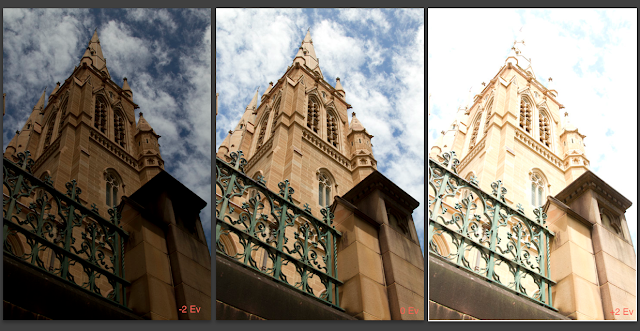 The picture on the left is underexposed, the one on the right is overexposed and the correct exposure is in the middle. As you can see there is a red number on the shots to the sides indicating how much do they differ - in our case - two stops from the neutral.
What's ISO?
Another thing that is closely linked to exposure is ISO sensitivity. No, it's not a spy code but even I don't know what the ISO abbreviation stands for. In plain English ISO sensitivity stands for the sensitivity of the sensor to light. Those who have used film know that films have limited or fixed ISO (say, one or two numbers). Well - good news - cameras have many.
The rule is that THE HIGHER THE ISO THE LIGHTER IT GETS - IF ALL THE OTHER SETTINGS ARE THE SAME. So the higher ISO is determined by the bigger number - some cameras have options to have ISO of 12000 and even more.